...Or The Technicalities Behind Rising Damp

Porous building materials can absorb moisture present in vapour or liquid form from the environment and transport it into the pore structure under the influence of various driving forces.

There are many moisture transport mechanisms that contribute to the movement of moisture inside the capillaries , some of them more important than others.

The wetting process of a completely dry building material (e.g. bricks or stones) involves several phenomena. It starts with vapour diffusion and the absorption of moisture by adsorption, which through interstitial condensation leads to capillary flow, resulting in a moisture saturated building material.

Here is a quick overview of the main wetting phases for a variable diameter single cylindrical capillary. 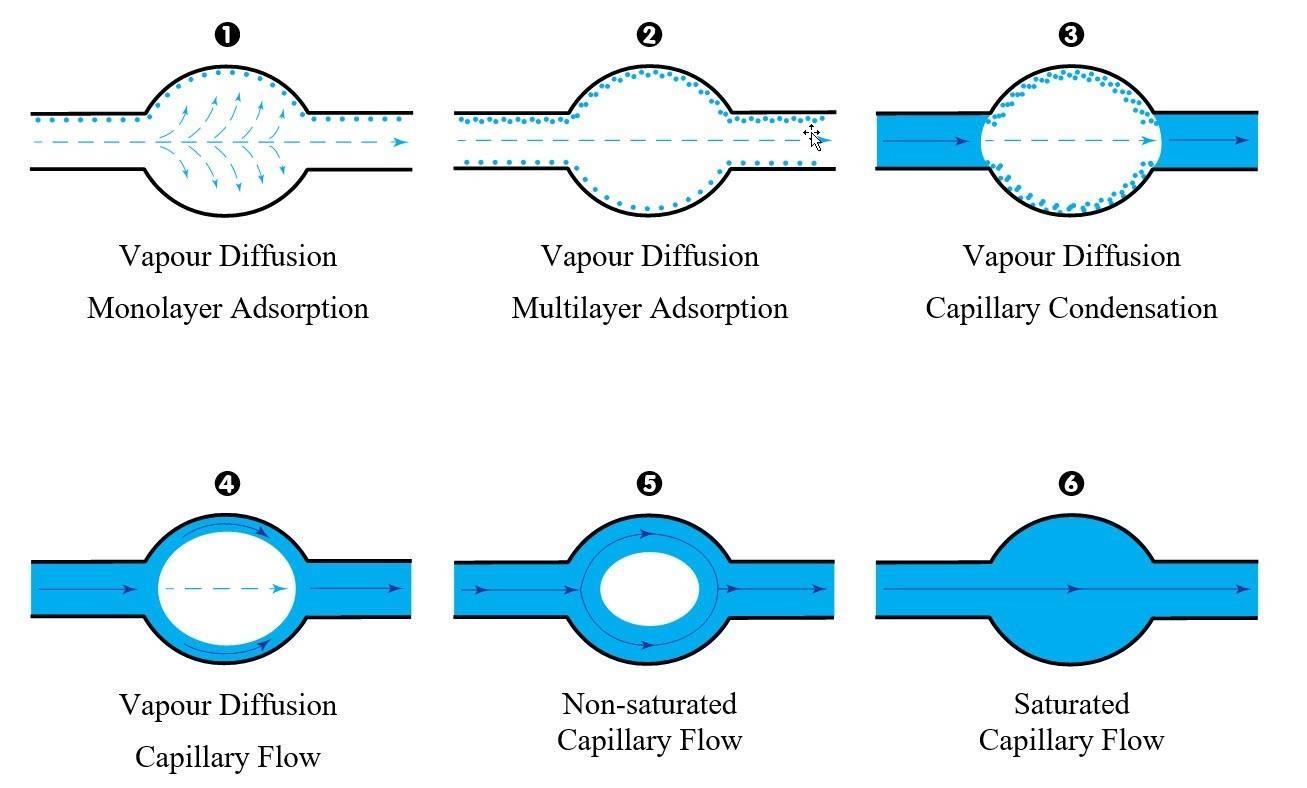 Here is a brief description of some of the phenomena that contribute to the wetting of porous media.

Vapour diffusion is the process by which water vapour molecules penetrate solid porous materials with no visible holes (such as plasterboard).

Water vapours are driven into the pore structure primarily by pressure differences (known as pressure gradients), which are formed due to changes in temperature. 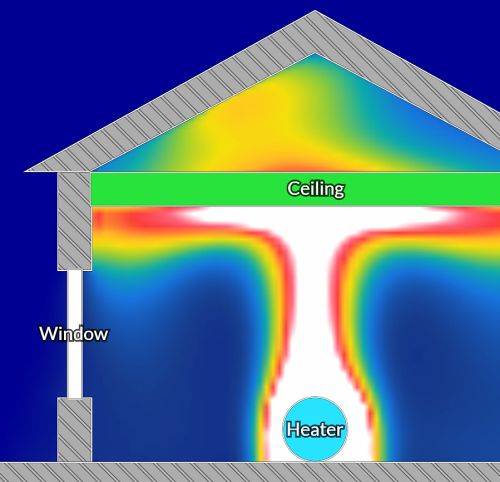 Heat distribution in a room

Air will move from higher pressure areas to lower pressure areas, which is from warmer areas to colder areas. Warmer areas from the centre of a room, due to their higher pressure, will “push” the water vapours into the wall fabric. The reverse will occur when walls warm up, the air and water vapours will move out of the warmer walls into the cooler room space, creating a dehydration effect, the opposite of wetting.

The vapour diffusion intensity is described by the water vapour resistance factor (mu-value) which measures a material’s resistivity (non-breathability) in comparison to air. Lower numbers denote more breathable materials. For very permeable (breathable) materials, such as mineral wool, the mu-value is close to 1 (air), whereas for less breathable materials with greater diffusion resistance it increases.

Mu-values are commonly used to describe the breathability of building materials. Some typical µ-values are given here for reference purposes: lime plaster – 7; solid brick – 8; gypsum board – 8; cement-lime mix – 18; concrete – 130 etc.

Adsorption is defined as the adhesion of an extremely thin layer of molecules onto the surface of solids or liquids.

Adsorption occurs due to molecular forces. Once water vapours are driven into the wall pores by pressure differences (diffusion) they come in contact with the pore surfaces and due to the presence of surface charges, they are attracted to and “parked” on the inner surface of the capillaries, initially in a single layer (monolayer adsorption), then in several layers resulting in multilayer adsorption.

ADsorption should not be confused with ABsorption: the process by which molecules penetrate under the surface into the bulk volume of another material; e.g. ink absorbed by chalk. Adsorption is a surface manifestation, while Absorption is a depth manifestation.

Capillary condensation: after an increasing number of layers adhere to the inner surface of capillaries (multilayer adsorption), the adsorbed layers eventually merge into a liquid flow and the formation of a meniscus, which will bridge the capillary surfaces.

There are two reasons why, in the presence of excess water vapour, condensation occurs:

What is known as rising damp is a combination of all these mechanisms all occurring in the same time. Water vapour transport is an important part of this process, and moisture can move up inside the wall capillaries without a continuous capillary flow.

In conclusion, here is an overview of the most common moisture transport mechanisms and their driving factors contributing to the wetting and dehydration of porous building materials. 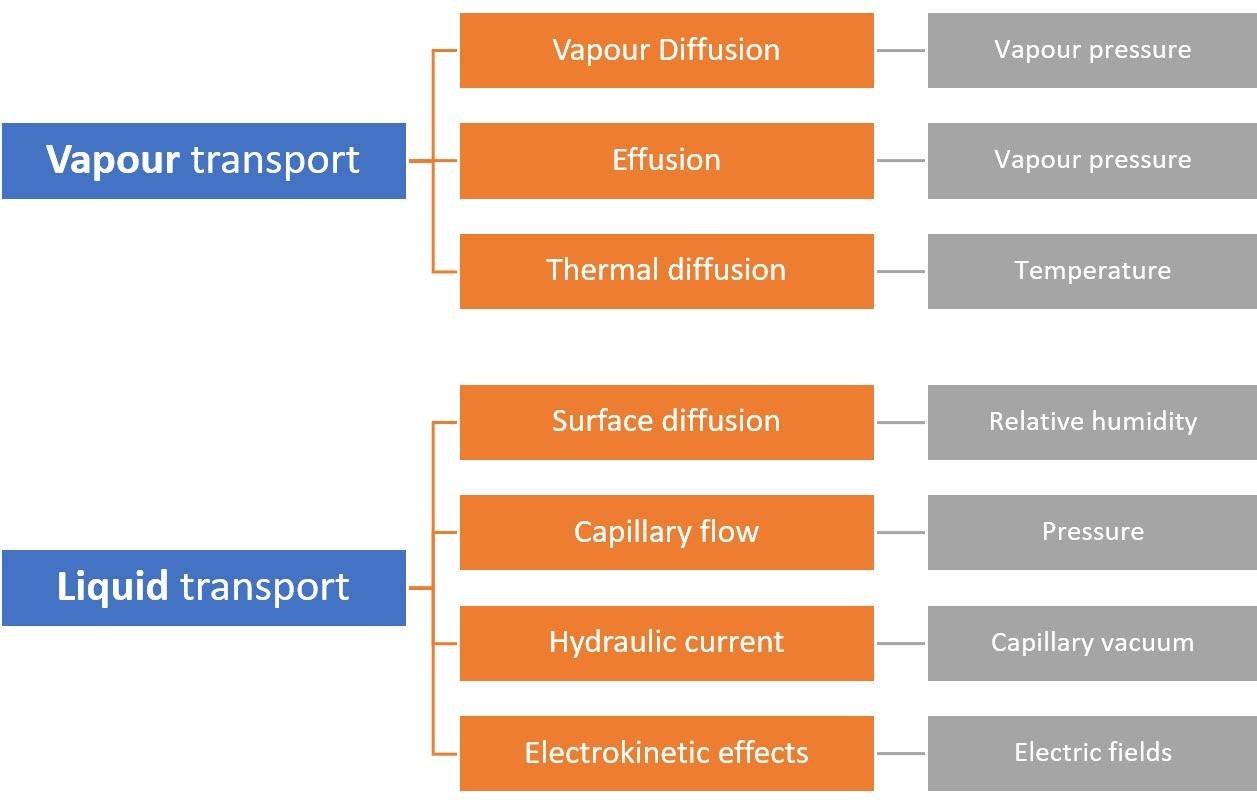 Val Juhasz is an Engineer with a Master’s Degree from the Manchester Business School (MBS). He is the co-founder of Core Conservation Ltd, specializing in building dehydration solutions, pioneering modern non-invasive building solutions that can be safely applied to old or listed buildings. He regularly attends conservation workshops in the UK and abroad. He held numerous talks and CPDs on damp remedy throughout the UK.

Potential Reasons Behind the Decay of Old Walls

The Need for Ongoing Innovation Our main area of interest is dampness, more specifically: understanding…