Benefits of our Magnetic DPCs

Here are some of the key benefits of magnetic DPCs:

During the past years we have been monitoring several hundreds of buildings long-term via professional moisture measurements taken at regular intervals. This lead to some very interesting observations about:

The research is still ongoing, however here is a summary of some of our findings in this regard:

One of the most interesting (an initially puzzling) observations we have made was that the magnetic DPC system can significantly reduce the moisture content of non-breathable walls.

In an ideal world, all old buildings should be repaired with lime and breathable materials. We know that in the real world this is not the case. A lot of old buildings have been and still being repointed and rendered with cement, have a non-breathable cement floor and are plastered with modern cement plasters. The individual or combined effect of these materials is detrimental to the fabric of old building, resulting in the accumulation of moisture in the wall fabric, resulting in long-term severe decay and dampness problems.

The repairs an be very labor-intensive and costly, involving the complete removal of the plaster, render or pointing and its replacement with lime.

In such cases the magnetic DPC system can make a real difference. The wall fabric gradually dries out BEHIND THE CEMENT and stays dry long-term. This has been confirmed over and over again by professional gravimetric (drilled core) measurements long-term - the most accurate testing method available.

Here is an example: a building with cement render, modern plaster, concrete floors and a concrete walkway around it - from conservation viewpoint, a lot of no-nos. Installing the magnetic DPC system produced a significant change within 6 months. 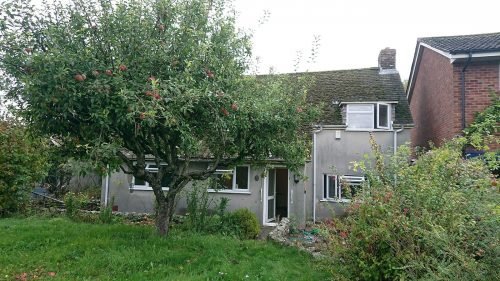 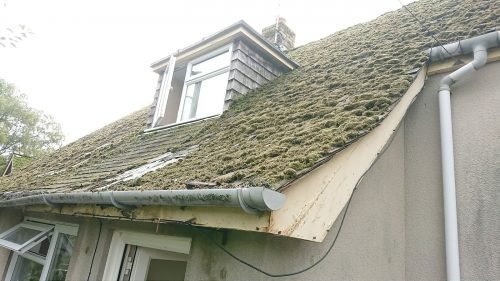 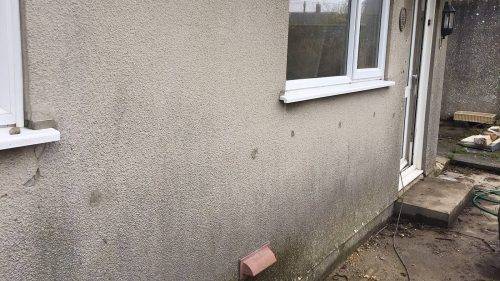 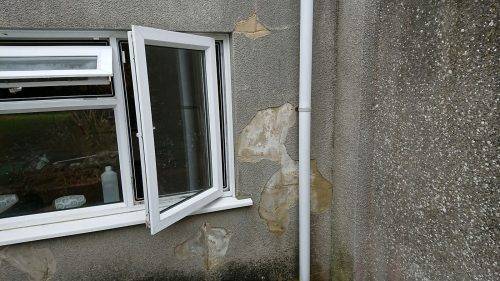 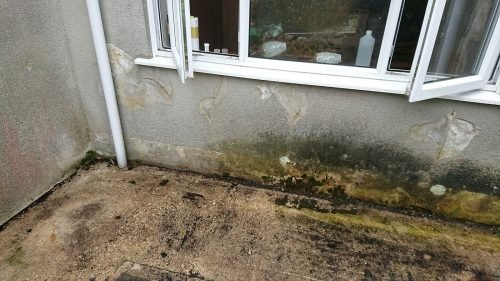 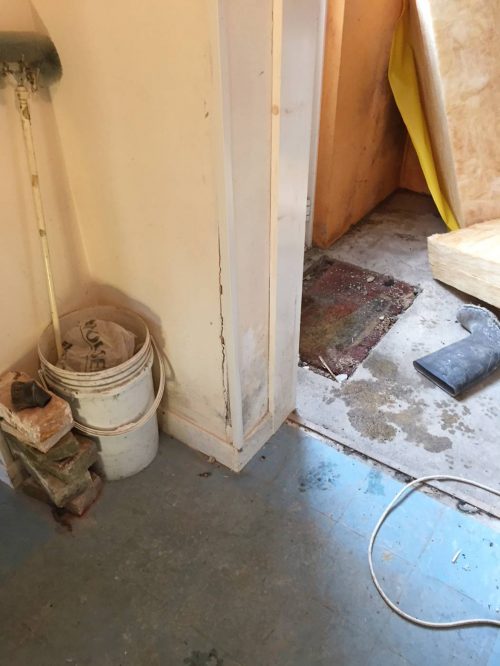 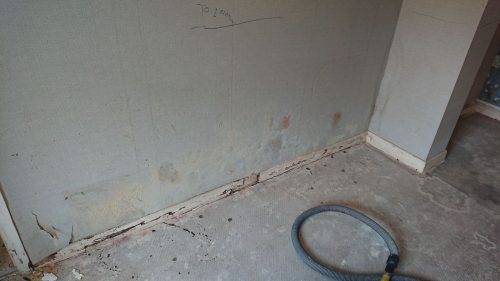 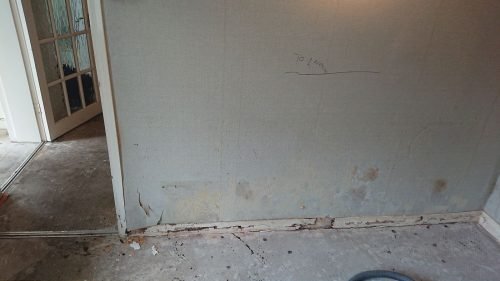 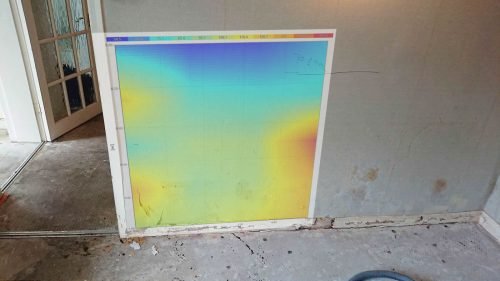 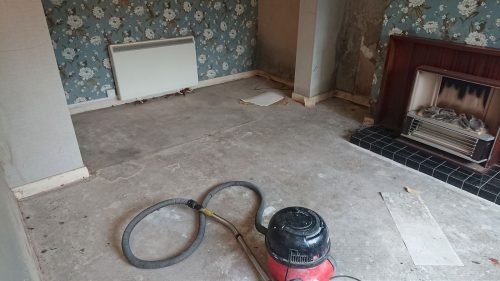 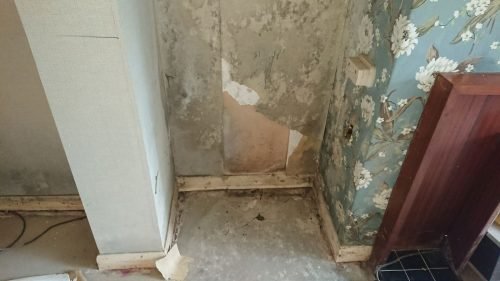 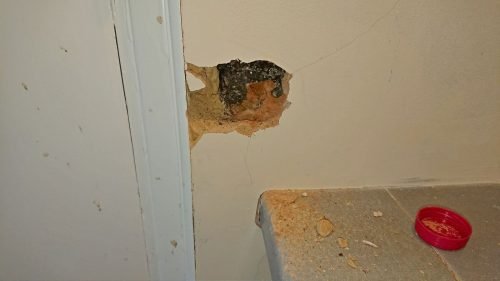 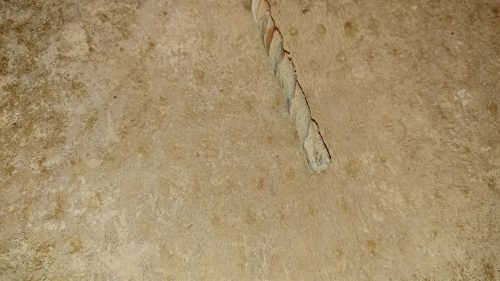 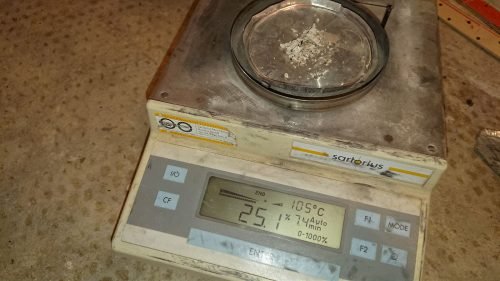 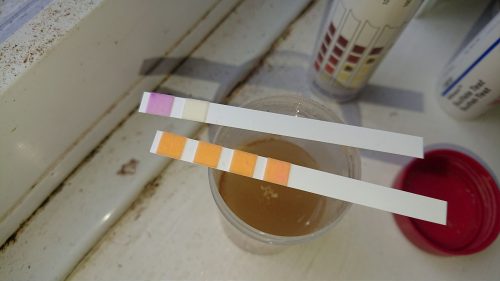 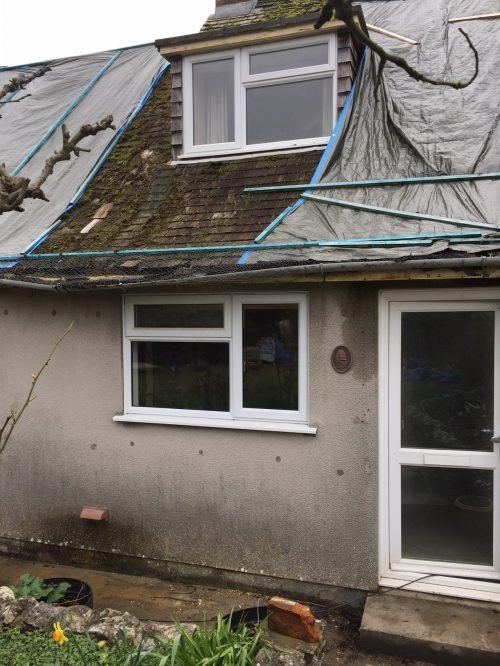 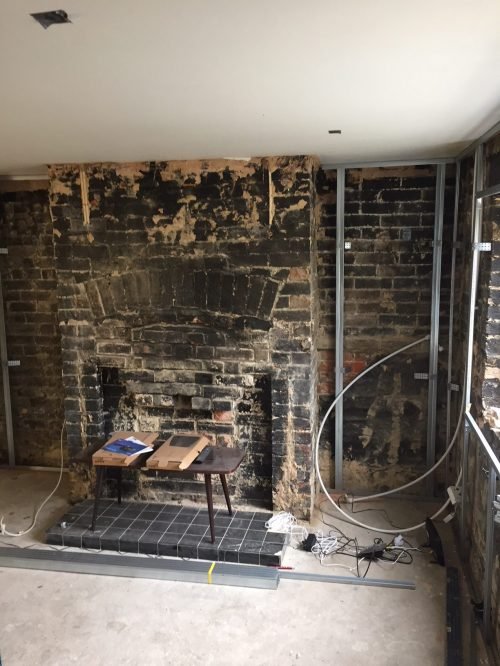 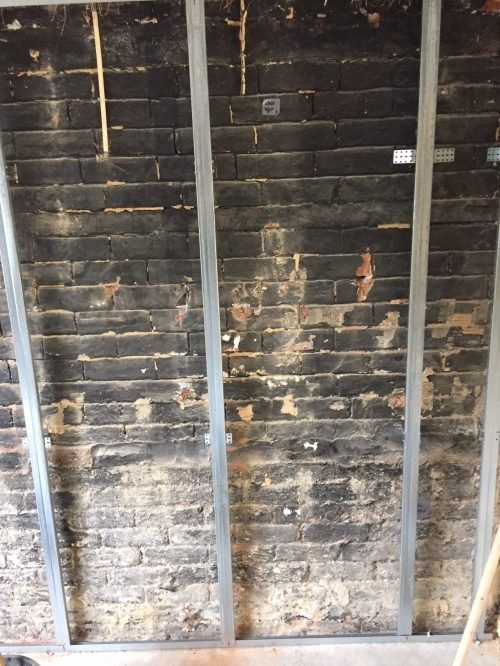 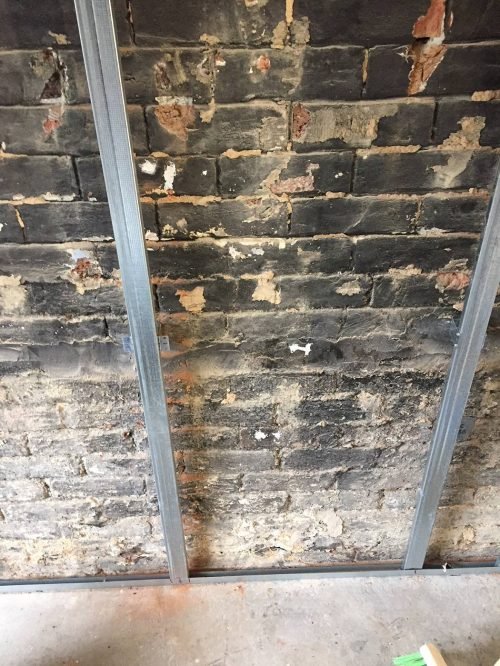 Drying out the building fabric to solum level has a beneficial effect onto the joist and floor boards, often stopping ongoing decay or protecting them from further decay.

3. Less Crumbling of the Wall Fabric

Ongoing crumbling of the historic building fabric is of major concern as it leads to a gradual irreversible deterioration of the building fabric. Although crumbling can have several reasons, one of the leading causes are ground salts.

The Magnetic DPC system, by stopping the upward transport of water and salts inside the wall capillaries, stabilizes the building, resulting in less crumbling.

My house has originally been an agricultural farm house, a potting shed built of sandstone, without a proper damp proof course. The stonework on the outside our house always has shown signs of damp and a bit of spalling and flaking. After 6 months there is a significant improvement, damp is reducing. Visually there has been a difference but more importantly your measurements have also indicated there is a definite difference, so your system must be working. It was still surprising and rewarding to see the results that I have now seen 6 months on. 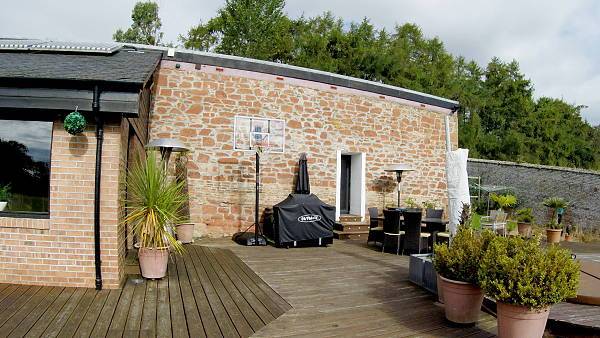 Does your building feels cold all or most of the time? Does it take a long time to heat it up or keep it warm? As the building fabric dries out it gradually regains its thermal insulation, significantly reduced by the dampness and humidity.

We often see a significant improvement in the internal ambiance of the building, an important side-benefit of the magnetic DPC technology.

Old House by the Canal

The house has been built in 1804 and it is situated very close to a canal. It used to be a shop and I converted it into a house. I have been living in it for 20 years and the basement was always damp.

I heard about your dehydration system from my builder who rented a garage next to mine. The system has been installed 6 months ago in June. The dampness in the ground is now gone, the room is operating normally. Where it previously took 3 hours to heat up the room now the room is operational in half hour, just like the rest of the house. It's a much pleasanter environment down there than before. I am very pleased with the results and if any of my friends would have similar problems I certainly wouldn't have any hesitation to recommend you. 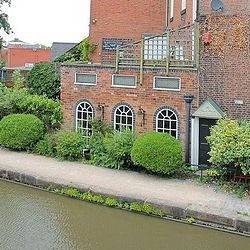 Condensation is typically not a dampness problem but an insulation problem. Walls cool down and the warm humid air inside condenses on the cold surfaces - usually at the bottom of the walls or corners. Condensation surface moisture provides the necessary water for mould to survive, resulting in black mould growth in these areas.

I am a physician, general medical practice. We own a medieval castle which was finished in 1577. The walls are red sandstone held together by lime mortar with rubble in-between, harled on the outside and lime-washed on the inside. The castle is built without any basements, the building really just stands on the ground and it has no damp course.

There is always rising damp creeping up the building, especially on the ground floor where it was rusting the sockets. We wanted to tackle the problem so we spoke to Core Conservation. They came out last year, did a bunch of measurements, fitted their damp system and one year later the stone is drying out, the cement is drying out; they are about 50% drier than last year. It is much better than it was.

Initially we had quite a lot of mildew and keeping the building warm did not help with that. Two things helped with the mildew: 1. the damp proofing system by reducing the moisture in the lower part of the building; 2. better airflow through the building.

Working with your staff was very easy and straightforward, very agreeable people, lots of integrity. The work was very professional, tidy, no mess left at all. I would have no hesitation recommending you to anybody. 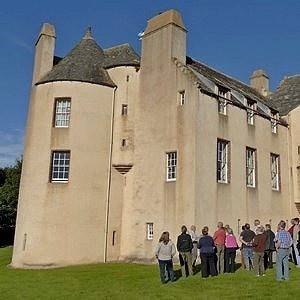 By drying out the building fabric musty smell often reduces considerably or vanishes altogether. This often happens within weeks or a few months after the installation of the magnetic DPC system.

As an architect I worked on both old and new buildings. I live in a stone-built farmer Border cottage built around 1910. Under the staircase there was a lot of fungal smell, which also permeated the clothing. This was particularly noticeable when I had a visitor. When they left home and opened their suitcase they had a very strong fungal smell coming from their clothing. You could feel this smell around the central wall, which is a solid stone wall with the staircase around it.

I came across your dehydration solution when you have been doing some work at one of my neighbours. I had your system fitted a year ago. After about 3 - 4 months I began to notice a difference: I got the feeling that the air is lighter somehow, not so heavy. The smell seems to be considerably reduced. When now I put my head under the staircase I don't have that strong, almost eye-watering smell. On my last trip to Sweden when I opened my suitcase I did not have the smell either. 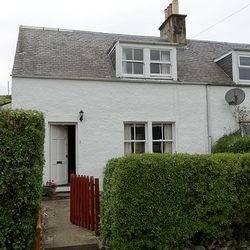 I run a B&B built in 1889 and had damp issues in the basement. I kept my linen and towels there and despite several washes I was getting that horrible musty smell. Every time I walked down the stairs into the basement I could smell that musty smell, so I had to do something about it.

I contacted Core Conservation through the internet, they came out and investigated the problem. They took samples out of the walls, measured their moisture content and confirmed that there was rising damp. Another company recommended me tanking, which would have only solved some of the problem instead of the whole issue, so I went with Core Conservation as it was the right thing to do.

Once the dehydration system was fitted, about a month or so later, I noticed that the smell has reduced, got less and less until I could not smell it anymore. And I thought: "Oh, I got so used to it that I can't smell it anymore." But my son visited me, funnily enough, this weekend and even he noticed that the smell was gone. He left a lot of his stuff in the basement and he used to moan about the musty smell and he had to throw some of his clothes out. This time, however, he didn't say any of that.

Initially the walls have been cold and damp, the samples taken from the walls were visibly wet. Now, at the last check the samples were not wet at all. You can also tell when you are in there, that you don't get that damp feeling down there. 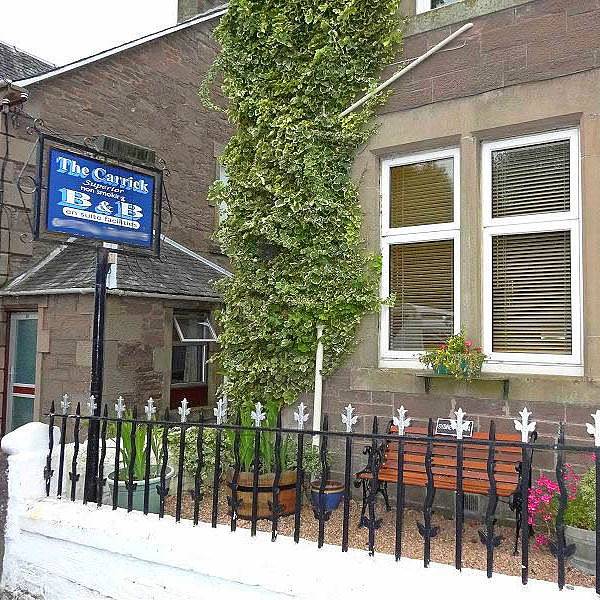 A drier, warmer house without mould or other pathogens results in a better, healthier living environment. Many customers report back to us changes of this nature.

We have two young girls, they are absolutely full of life and the last things we want to do is to encourage any respiratory or health issues.

Lily, age 6, she has a history of chestiness, she has been admitted to hospital for chest infection from a young age. Since the installation of your dehydration system she did not have a flue or a cough. She has been "symptom free", so to speak, for the last year, which is good. Whether that's an indicator, I don't know, but I wanted to mention it. The results speak for themselves. 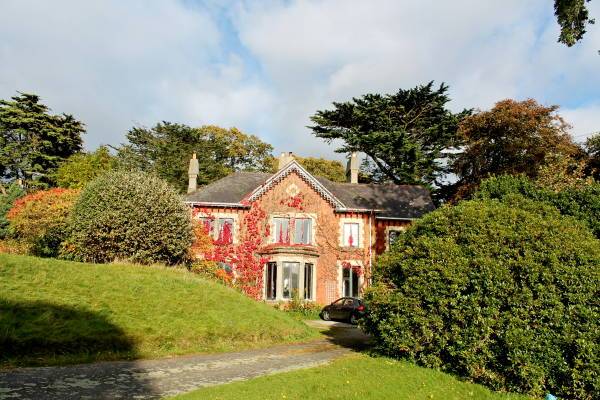